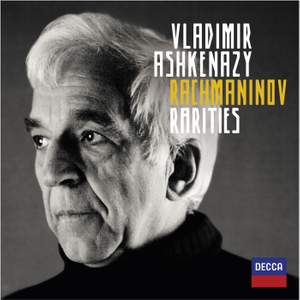 Legendary Russian pianist Vladimir Ashkenazy is considered the pre-eminent interpreter of Rachmaninov’s music, and as he marked his seventy-fifth birthday (6 July 2012), he recorded a final album of the composer’s music featuring the Seven Pieces (Moments Musicaux) Op.10, three Nocturnes, and ten shorter early works, including an unpublished 'Song without Words'.

March 2013 sees Vladimir Ashkenazy’s fiftieth anniversary as an exclusive Decca Classics artist. To mark this remarkable milestone, a limited-edition original jackets 50-CD Ashkenazy-Rachmaninov collection will celebrate a unique career that began in March 1963, with the classic recording of Rachmaninov’s Piano Concerto No.3 with the LSO under Anatole Fistoulari.