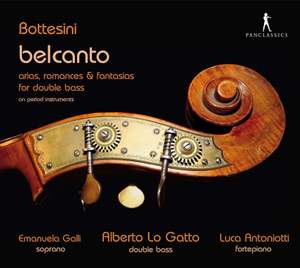 Giovanni Bottesini (1821-1889) is frequently compared to Paganini, and not without good reason: both were charismatic musical personalities who captivated the public wherever they appeared, and both revolutionised the playing techniques of their respective instruments. Bottesini introduced the solo bass strung with only three strings and tuned a whole-tone higher than usual in order to attain a more brilliant and sustainable sound. This musician, already a legend in his own time, not only performed as a travelling virtuoso on the stages of the world but also as a celebrated operatic conductor and composer. It is therefore no wonder that Italian opera also strongly influenced his compositional production.

The double bassist Alberto Lo Gatto recorded his CD with the programmatic title 'Belcanto' with an Italian bass built during the19th century, played in so-called solo tuning, and his accompanist Luca Antoniotti also plays an historic instrument, an Érard grand piano built in 1871. They interpret variations and fantasias based on arias of Bellini and Paisiello in which Bottesini sounds out the entire spectrum of the double bass, from lyrical expressiveness to breakneck virtuosity.

Moreover, we can also hear the soprano Emanuela Galli, who sings some of the opera themes in their original versions and interprets the well-known romance 'Une bouche aimée'.