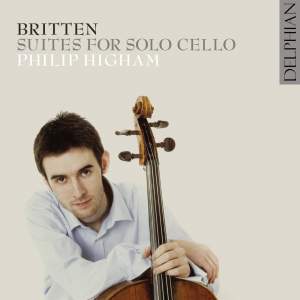 this young Scot's ambition pays off: there's nowhere to hide in three solo suites, but why hide a technique as assured, a musical imagination so finely attuned to Britten's expression, or a Tecchler... — BBC Music Magazine, May 2013, More…

Britten’s meeting with Rostropovich in 1960 was a watershed, the great Russian cellist becoming the primary collaborator of his later years, and inspiring a whole series of masterworks. Among them are the three suites for solo cello, written as a conscious homage to those of Bach (there were originally to have been six). Intriguingly, the Britten scholar Paul Kildea sees the first as a coda to the War Requiem, the second as a snapshot of a lifetime of musical obsessions, and the third as reaching back to much earlier works and suffused with primordial Russian melody.

The young virtuoso Philip Higham brings a youthful vigour and deep intelligence to these seminal masterpieces, resulting in performances of commanding authority and intensity.

Philip Higham is rapidly emerging as one of the most prominent young cellists from the UK. In 2010 he won 2nd prize in the Grand Prix Emanuel Feuermann Competition in Berlin, making him the first British cellist in generations to have won top prizes at three major international competitions, including 1st Prize in the 2008 Bach Leipzig and 2009 Lutoslawski Competitions. He was selected for representation by Young Classical Artists Trust (YCAT) in 2009. Born in Edinburgh in 1985, Philip studied cello with Ruth Beauchamp at St Mary's Music School and continued his studies at the Royal Northern College of Music with Emma Ferrand and Ralph Kirshbaum. He graduated in 2007 with First class Honours and was immediately selected as an International Artist Diploma student. In 2010 he was one of the first artists invited to take part in the Royal Philharmonic Society/YCAT Philip Langridge Mentoring Scheme with Steven Isserlis.

this young Scot's ambition pays off: there's nowhere to hide in three solo suites, but why hide a technique as assured, a musical imagination so finely attuned to Britten's expression, or a Tecchler cello sound as burnished and wonderfully textured as this? His formidable mastery is lightly worn, and he exudes an invigorating sense of freedom, though not a single technical imperfection mars this recording (he was co-producer)

it is Higham's expansive but tender playing that pulls this music as far away from slapdash as it possible to be...despite his appreciation of their contextual importance, Higham still manages to revel in the glorious sound they invite the cello to make, playing around with its warmth of colours to bring out with glorious inevitability the Bach and Shostakovich hidden therein.