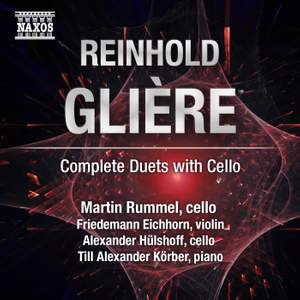 [Glière] holds our attention by constantly ringing the changes on style and form so as to ensure that each piece has an individual identity and to differentiate it from its neighbours...Such... — MusicWeb International, April 2013 More…

No. 2 in B flat major: Commodo

No. 3 in E minor: Andantino

No. 5 in A major: Andantino poco animato

No. 6 in D minor: Allegretto

No. 8 in F sharp minor: Affanato

No. 9 in E flat major: Cantabile

A highly decorated composer in Soviet Russia, Reinhold Glière maintained a low political profile and a conservative but astonishingly inventive melodic style. His interest in national harmonies and folk-music emerges in the Twelve Album Leaves, and his remarkably important contribution to cello repertoire is demonstrated both in his mastery of small forms in the Duets Op. 39, and a unique ability to create orchestral sonorities in the Duets Op. 53, a rare example of an original cycle for the delightful combination of two cellos.

[Glière] holds our attention by constantly ringing the changes on style and form so as to ensure that each piece has an individual identity and to differentiate it from its neighbours...Such a recipe might well suggest that, by stressing variety and brevity, these works run the risk of sounding disparate or disjointed but, quite apart from the composer’s own skill, the performers’ expertise here ensures that that never happens.