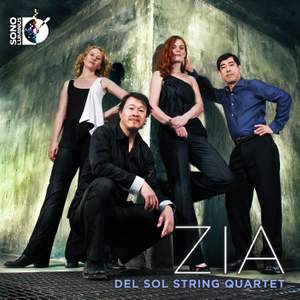 While the five contemporary composers on this CD are deeply tied to the Western European music tradition--especially its system of notation--they draw on ancient and traditional folk music from four corners of the world and make it new by incorporating techniques such as inventive intonations or heterophony.

Cowell went beyond his predecessors (Beethoven, Rimsky-Korsakov, Bartok, and others) by proselytizing for in-depth studies of music in Asia, Africa, Central and South America and what we call the “Middle East,” rather than just a few selected European ethnicities. In retrospect, his lifelong work created a more welcoming environment for those who emerged after his death, including José Evangelista, b. 1943, Reza Vali, b. 1952, Elena Kats-Chernin, b. 1957, and Gabriela Lena Frank, b. 1972.

The San Francisco based Del Sol String Quartet, founded in 1992, has long made a practice of fostering contemporary music from throughout the entire Western Hemisphere, working with the composers themselves whenever possible. Since Del Sol released their first commercial CD in 2002 focused on music of the Americas, their recorded repertoire has expanded to composers of the Pacific Rim (Ring of Fire (2008)), historical antecedents-- the complete quartets of George Antheil (2005) and Mark Blitzstein (2009)--and, by this release, a more global scope, with influences from Peru, Turkey, Spain, Iran, and Uzbekistan. Del Sol’s approach is distinguished by selecting music originally composed for string quartet rather than arrangements referencing traditional folk music.