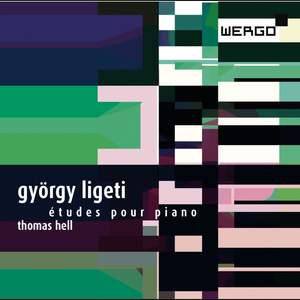 In 1985 György Ligeti produced an entire volume of piano etudes, to which he added two further volumes in the following sixteen years. Quite a few people in New Music circles then reacted with a lack of appreciation and understanding: Whereas the lively piano etude tradition of the 19th century – inextricably linked with Czerny, Chopin or Liszt – was continued by Bartók, Debussy or Stravinsky at the beginning of the 20th century, this tradition no longer existed by the end of the 20th century. The etude appeared to be a relic from another time.

Ligeti had various reasons for these compositions: He was concerned to revive a great musical tradition and to explore its potential in a contemporary form. Furthermore he liked to play the piano himself, although with “inadequate pianistic technique”, as he once remarked. Apparently, it was sufficient to create some of the most difficult works for piano in the entire piano repertoire: “The anatomical situation of my hands and the configuration of the piano keyboard determined the products of my imagination.” His piano etudes have also to be seen in the context of his admiration for the great piano literature from Bach to Debussy. Furthermore they are exercises in polyphonic writing and playing technique, with polyphony here having to be understood in a considerably expanded sense. For Ligeti’s piano writing is not only polyphonic in the customary sense, but also polyrhythmic, poly-temporal, and even poly-ethnic (he uses material from very different European and non-European musical cultures – from the Balkans via Africa to Asia). In the end, his piano etudes are considerably more than mere technical exercises. Each piece is at the same time a poetic miracle, transcending its given musical and technical tasks.

In the early days, pianists felt obliged to obey Ligeti's injunction to go always to extremes - of loudness, speed or sheer frenzy. Nowadays, as this new recording shows, they are more relaxed and worldly-wise...In general, it's the fluidly atmospheric or reflective Etudes that come off best...but overall, this is a magnificent recording.

Whether polyrhymic or simply elegant, each piece transports the listener to a different world … Pierre-Laurent Aimard (Sony Classical) remains a wonderful guide to these gems, but Thomas Hell is very much his equal