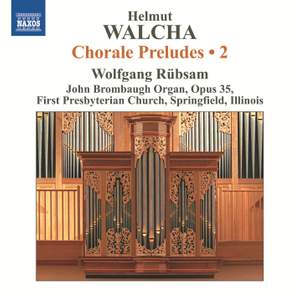 A native of Leipzig and steeped in the musical tradition of J. S. Bach, Helmut Walcha was one of the most influential organists of the 20th century. Building on Baroque examples, Walcha started composing the Chorale Preludes during the war years and they became popular teaching pieces as well as ideal vehicles for expressing the clarity and colour of organs both historic and new. As one of Walcha’s most renowned students Wolfgang Rübsam is uniquely authoritative in his interpretations. This is the second of four volumes of Walcha’s complete Chorale Preludes.