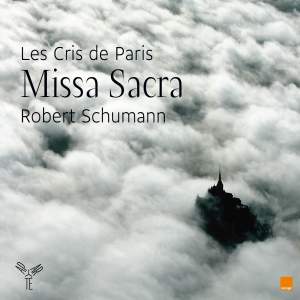 From the last creative period of Schumann, the 'Missa Sacra' is a wonderful piece, but almost unknown, probably because of the circumstances of its composition. Originally written for choir and orchestra, Schumann wrote a version for choir and organ, which he sent, under a pseudonym, to an English composition competition. The piece was revealed only after his death at the insistence of Clara Schumann and only the Kyrie and Gloria were performed in Schumann's lifetime.

So this is a real rediscovery made by Geoffroy Jourdain and Les Cris de Paris, revealing, for the first time on period instruments, with, as soloist, one of the most talented current young singers, the mezzo-soprano Marianne Crebassa. The little known Missa Sacra is beautifully orchestrated and is coupled with the a capella double choir Opus 141 by Geoffroy Jourdain in a very German Romantic programme.

The lyrical Offertorium is a high point in Schumann's rarely performed Mass.

it is worth shelling out the extra for this newcomer for its clearer orchestral sound picture, heartfelt choral singing and, as its coupling, a vivid and open-throated performance of four late double-choir part-songs.

a pleasure throughout. The singing of the choir is confident, and the orchestra in the Mass has plenty of life. There are other versions of all these pieces in the catalogue, but I cannot imagine that any of the alternatives would be significantly better than this. The recording is immediate but has plenty of atmosphere