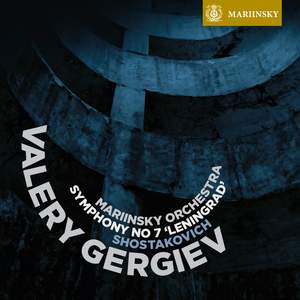 such is the poignancy and sensitivity with which Gergiev shapes the world-weary melodies that I was immediately won over...[in the Finale] Gergiev exerts a much tauter control over proceedings,... — BBC Music Magazine, March 2013, 4 out of 5 stars More…

Valery Gergiev continues his Shostakovich symphony cycle with an emotionally-charged performance of the Seventh Symphony. Shostakovich dedicated his Symphony No 7 to the defiance shown by the citizens of Leningrad in the face of Nazi totalitarianism. Despite the widespread reassessment that has since taken place regarding the inspirations for his symphonies, the ‘Leningrad’ symphony remains a highly-potent symbol for the residents of modern-day St Petersburg.

Previous releases in Gergiev’s Shostakovich cycle have included Symphonies Nos 1 & 15, 2 & 11 and 3 & 10. Between them they have received two Grammy Award nominations, as well as Chocs from Classica (France) and Editor’s Choices from Gramophone.

Gergiev will conduct Shostakovich symphonies with the Rotterdam Philharmonic in December, and complete the Brahms & Szymanowsky cycles with the LSO in London. In January the Mariinsky orchestra will perform a number of Shostakovich symphonies with Gergiev in France and in February they return to Russia for performances of Shchedrin’s 'Dead Souls' and Strauss’ 'Elektra'.

such is the poignancy and sensitivity with which Gergiev shapes the world-weary melodies that I was immediately won over...[in the Finale] Gergiev exerts a much tauter control over proceedings, the inexorable tread of the sarabande rhythm achieving mesmeric cumulative power which is helped in no small measure by the superbly responsive orchestral playing and the tremendous dynamic range of the recording.

Gergiev and his heroic St Petersburg orchestra show that the Adagio – touched by a sense of intimacy, passion and tragedy – is the real kernel of the symphony. This live recording has occasional imperfections of ensemble, always a hazard with Gergiev, but what counts is the big picture, captured here with intensity, heart and soul.