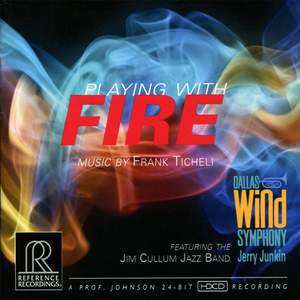 II. Tex-Mex on the Riverwalk

II. Dreams Under a New Moon

The Dallas Wind Symphony and the Jim Cullum Jazz Band team up on a new Reference Recordings sonic spectacular!

Many of composer Frank Ticheli's works have become standards in concert band repertoire, and PLAYING WITH FIRE weaves in enthusiastic playing by the famed Jim Cullum Jazz Band.

All wind music and traditional jazz enthusiasts need to have these knockout performances, conducted by Jerry Junkin.