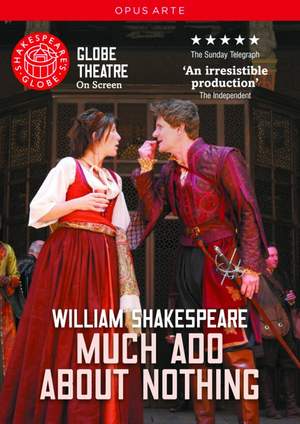 Offer, William Shakespeare: Much Ado About Nothing

Warbeck: Much Ado About Nothing, incidental music

One of Shakespeare’s most popular comedies, Much Ado About Nothing contrasts the happiness of lovers Claudio and Hero, and the cynicism of sparring partners Beatrice and Benedick, who are united in their scorn for love. Trickery plays a large part in the story, as Beatrice and Benedick are duped into declaring their love for one another, and the dastardly Don John deceives Claudio into believing that Hero has been unfaithful. Marking the debut of director Jeremy Herrin at the Globe Theatre, this production features Eve Best as the feisty and high-spirited Beatrice and Charles Edwards as her cynical counterpart, Benedick.