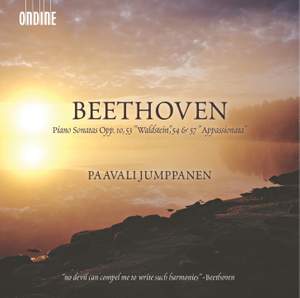 This double-CD release is a second volume in pianist Paavali Jumppanen’s ongoing recording cycle of the Beethoven piano sonatas.

This new release contains six piano sonatas: three early Op. 10 sonatas (published in 1798) and three sonatas written between 1804–06 (Opp. 53, 54 & 57). Piano Sonata Op. 53 Waldstein, completed after the 3rd Symphony, was described by Wilhelm von Lenz, an early biographer of Beethoven, as a “heroic symphony for piano.” Piano Sonata Op. 57 Appassionata is undoubtedly Beethoven’s darkest and most aggressive work. The Sonata has been compared to Dante’s Inferno and Shakespeare’s bloodthirsty Macbeth.