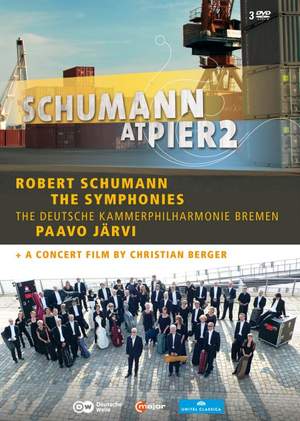 Offer, Schumann at Pier2: The Symphonies 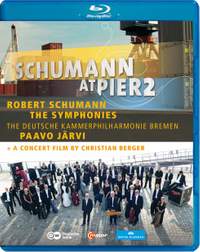 Schumann at Pier2: The Symphonies

Schumann at Pier2 is not a usual concert film; it shows the four Symphonies of Robert Schumann from a new perspective, filmed at Pier2, a former dockyard in the harbour of Bremen where pop and rock concerts usually take place. Stars of the film are the conductor Paavo Järvi and the Deutsche Kammerphilharmonie Bremen and they aim to present these works to a young audience.

Included in this 3 DVD set is also a 98-minute film with Paavo Järvi. This documentary explains the whole idea behind the project and contains footage from rehearsals, comments from Paavo Järvi about the symphonies and the interpretation, biographical information about Robert Schumann as well as musicians demonstrating salient passages and explaining their interpretation.