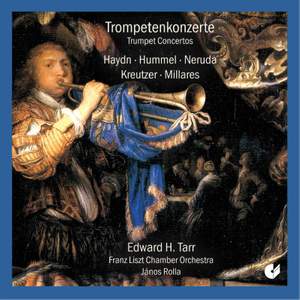 The period after 1750 meant a crisis for the high brass instruments, trumpet and horn. To be sure, the art of playing higher and higher on a simple or 'natural' brass instrument had reached its apogee, but the compositional style had changed. Owing to a new bourgeois idea of society, the trumpet fell out of favour, since it represented the old courtly culture. Felix Weingartner wrote of an anticipatory longing for reform which was in the air at that time. The final reform was brought about by full chromatifica-tion of trumpets and horns resulting from the invention of the valve (just before 1815). On the pathway to this final reform, however, the most intellectual brows were furrowed over the most efficient means of making brass instruments chromatic. The works on this disc represent three steps on this pathway: the explosive expansion of the frontiers of high-register playing by employing the 5th octave of the harmonic series, which had remained more or less unused, from high C upwards, around 1770 (Neruda); the Viennese court trumpeter Anton Weidinger's successful introduction of the keyed trumpet around 1800 (Haydn, Hummel); and finally the establishment of the 'Romantic' trumpet in low F or G with valves after c. 1828 (Kreutzer, Millares). On this disc, the works by Neruda, Haydn and Hummel are performed on modern instruments (although the horn employed in the Neruda concerto was built over 100 years ago). The 'Romantic' trumpet used in the works by Kreutzer and Millares is pitched in low D and E flat, respectively.