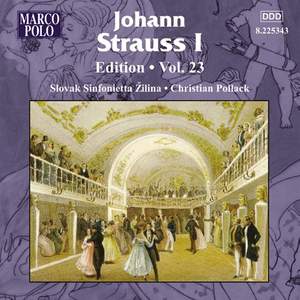 Despite charitable funds raised by the Fortune and Viennese Kreutzer polkas, revolutionary Habsburg insurgencies became a dangerous fact of life in the Vienna of 1848. Strauss (the Elder) demonstrated solidarity through his Austrian National Guard March, lampooning the old order with his March of the Legion of Students. Heard on this recording in its original, more transparent orchestration, and without the drumroll, the irrepressibly festive Radetzky March celebrated military victory in Italy and became his most famous work. Viennese citizens filled the carnival season ballrooms, and the escapist Stress Relievers waltzes, which conclude this recording, roused frenzied cheering.

Does the world need a complete edition of Johann Strauss the elder? Probably not, but considering the current phenomenal success and sales of André Rieu's Johann Strauss Orchestra, now seems the ideal climate in which to publish it.
Pollack and the Slovak Sinfonietta, needless to say, knock spots off Rieu. Pollack, by the way, is a veteran of both the earlier Josef and Johann II editions.