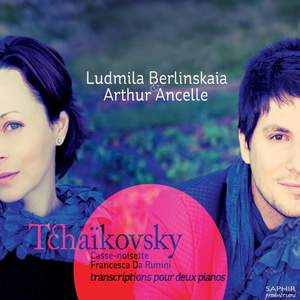 Ludmila Berlinskaia’s journey has been an extraordinary one. Raised in Moscow’s cultural high society, her father was the violoncellist Valentin Berlinsky, founder of the Borodin Quartet. She became well-known with a starring film role at the age of thirteen, but it was to music that she chose to devote herself, studying with great distinction at the Gnessine Institute, then at the Moscow Conservatory.

« People wonder why pianists, possessing as they do an instrument with by far the greatest repertoire, should seem so unable to content themselves with it and continue, through transcriptions, to borrow from the repertoires of others.

As far as I am concerned, if there is a piece of work that I especially appreciate and would like to play, but can only do so through a transcription for piano, and if I think that playing this piece on the piano will bring something special to it, then I will write the transcription without hesitation.

The transcription must be faithful to the original, but I always favour keeping the essential spirit of the piece: whilst respecting the general tone, I prefer to lighten the writing to preserve the pace, rather than try to over-embellish and risk becoming stuck. It is particularly important to respect the composer’s intentions, be it the nuances, the balance, the rhythm etc., and the piano should also bring its percussive, dynamic side into play, allowing the musical intentions, sometimes somewhat hidden in certain pieces, to be fully expressed. This may be the case in “Francesca da Rimini”, a piece that has rarely been attempted by orchestras, where two pianos can highlight the incredible dynamics of the whirlwinds of Hell and the intersecting melodic lines of the heroine’s themes. »