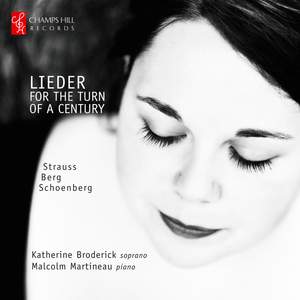 Open Your Eyes: Lieder for the Turn of a Century

Here's an irresistable recital of questing, late-Romantic songs...Katherine Broderick has just the voice and temperament to express these subtle and exciting shifts between innocence and experience,... — BBC Music Magazine, March 2013, 5 out of 5 stars More…

Katherine Broderick was the winner of the 2007 Kathleen Ferrier Award. Following studies at the National Opera Studio in London, Guildhall School of Music and Drama, Royal Northern College of Music and the Mendelssohn Hochschule in Leipzig, she is now a member of the ENO Young Singers Programme. In demand at opera houses in the UK and Europe, her stage repertoire encompasses Wagner, Verdi, Mozart and Britten.

The repertoire on 'Open Your Eyes' was all composed between 1885 and 1908 and opens with Eight poems by Herman Gilm from his Letze Blätter which Richard Strauss set in 1885 while still in his very early twenties. The set includes three of his best‐loved songs (also recorded by Felicity Lott on CHRCD037), including Die Nacht, where he shows his flair for nocturnal tone painting and Allerseelen or 'All Souls Day' where the most lyrical of vocal lines is set against the background of flower‐decked graves.

Alban Berg composed his 'Seven Early Songs' starting in 1905, while a student of Schoenberg, with the songs influenced by Strauss, Mahler, Wolf and Debussy and having a distinct sense of a romantic musical world expanded beyond its limits, on the brink of dissolving into modernism.

Arnold Schoenberg's Brettl Lieder or Cabaret Songs of 1901 are tonal works, intended to use a more popular song idiom to convey more 'serious' ideas, and setting eight poems taken from a collection published as simply 'German Songs' in 1900 by Otto Julius Bierbaum. The most unusual of the set is Hugo Salus' Der Genügsamerliebhaber or 'Easily satisfied lover': a man tells us that his lady‐friend has a black cat with a soft, velvety coat. The woman spends all her time caressing her cat's fur while it sits on her lap, and it shivers when he strokes it. Later, he puts the kitty on his bald head and she plays with it and laughs. Throughout the songs, Schoenberg responds to the texts with simplicity and humour, and no little suggestiveness in this instance.

Here's an irresistable recital of questing, late-Romantic songs...Katherine Broderick has just the voice and temperament to express these subtle and exciting shifts between innocence and experience, tonality atonality. A sense of tenderness and vulnerability tempers the high brilliance of her soprano...For Schoenberg's calculatedly popular Brettl-Lieder, Broderick becomes entertainer supreme, with knowing, vividly characterised and confiding performances

[Broderick's] varied experience pays dividends in this recital...Given the scope of her Strauss, it is no surprise to find that Broderick is equally engaging in the contrasting demands of Berg's Seven Early Songs and Schoenberg's cabaret-based Brettl-Lieder...a judicious mix of not-too-brash bravado and playful sensuality makes this perofrmance just the ticket.