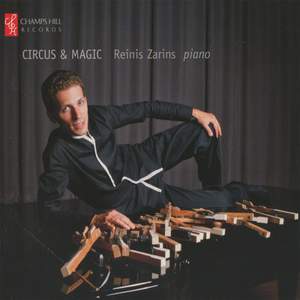 the Ligeti is a delight, beginning with needle-sharp precision and culminating in Mediterranean warmth. Zarins's Prokofiev is nicely idiomatic, and his performance of Petrushka is one of the... — BBC Music Magazine, April 2013, 3 out of 5 stars More…

Dialogue and Dance of the Heavyweight

Ligeti: Der Zauberlehrling (No. 10 From Etudes)

London‐based pianist Reinis Zarins makes his debut recording for Champs Hill Records with ‘Circus and Magic’. Born in Riga in 1985, he is a prize‐winner in eleven international piano competitions and performs regularly with leading orchestras in Latvia for broadcast on national radio and TV, and has been recognized with national awards. He has performed at the Lucerne Festival, Bath Musicfest and the Norfolk & Norwich Festival.

Ernest Bloch, essentially a romantic composer torn between his natural instincts and modernist trends, produced his character sketches The Four Circus Pieces for private performance but was eventually persuaded to publish them. One is dedicated to “the sad and ever‐comprehending Charlie Chaplin” whom Bloch admired. He sent the music to Chaplin, himself a skillful composer, but received no reply.

Included on this album are three pieces by Debussy, including his firework display in Feux d’Artifice, a fantastic display of inventive piano‐writing, and Masques , inspired by the Commedia dell'arte as painted by Watteau - a blend of joy and pathos. Marguerite Long, who studied with Debussy, wrote: “I hear Masques - a tragedy for piano one might call it - as a sort of transparency of Debussy's character … He was torn with poignant feelings which he preferred to mask with irony”.

Three Pieces from Prokofiev’s ballet music for Cinderella follow: Intermezzo creates wonderful imagery of the Waltz guests danced to at the ball; Gavotte - played during a scene in which Cinderella takes a broom as her dancing partner; and Slow Waltz, the penultimate number in the full ballet, which is played as the Prince and Cinderella dance together in an enchanted garden. Even when divorced from their orchestral colour, these pieces still possess a strong tactile feeling and a sense of wonderment.

Ligeti's eighteen Études have become modern classics. Étude No.10 (Der Zauberlehrling) dates from 1994 and is named after the celebrated Goethe poem which inspired Dukas to write his symphonic poem/scherzo The Sorcerer's Apprentice.

This recital disc concludes with Three Pieces from Petrushka by Stravinsky arranged in 1921 from the 1911 original, and dedicated to Arthur Rubinstein. Danse Russe is taken from the music in Tableau One to which Petrushka and the other puppets dance after being brought to life, and is followed by In Petrushka’s Room. The Shrovetide Fair, with its evocation of a teeming crowd, completes the set. With these pieces, Stravinsky stated his intention of writing something essentially pianistic ‐ in no way an imitation of the sound of the orchestral score.

the Ligeti is a delight, beginning with needle-sharp precision and culminating in Mediterranean warmth. Zarins's Prokofiev is nicely idiomatic, and his performance of Petrushka is one of the most charming accounts of this work I have ever heard.