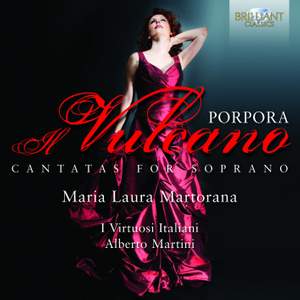 Nicola Porpora was a celebrated vocal teacher, as well as a highly respected composer, of mainly vocal works (operas, cantatas). Among his pupils were Haydn, Alessandro Scarlatti and Pergolesi. His profound knowledge of the voice and its possibilities resulted in compositions of the highest challenge to the performer.

The title 'Il Volcano', one of the Cantatas recorded on this disc, gives a clear indication as to the explosive content of the music - and Maria Laura Martorana possesses all the qualities required for an effective performance of this music: effortless and brilliant vocal technique, capable of the most daunting vocal acrobatics, and a passionate and dramatic temper, conveying the strong emotions expressed in these Baroque Cantatas.

Behind all great students is a great teacher. This is true of Haydn, Scarlatti and Pergolesi who, among others, were all taught by the celebrated Nicola Porpora. As a professor of singing and composition, Porpora gave lessons in his native Italy and across Europe. A distinguished composer in his own right, his extensive knowledge of vocal technique allowed him to compose cantatas as well as a host of operas, all of which were considered masterpieces in their own day.

Most of Porpora’s cantatas - veritable masterclasses of vocal composition - are found in the 1735 collection, published in London and dedicated to Frederic, Prince of Wales. This disc, however, also presents three of an unknown date: while Venticel che tra la frondi and Il Vulcano can be traced back to Porpora’s time in Venice (the former in particular contains similarities to his Venetian sacred music), Il Ritiro is likely to be the most modern, carefully reconstructed from a collation of various possible manuscripts. At any rate, these cantatas are a testimony to the composer’s reputation as one of the most important and influential musicians of the 18th century.

Coloratura soprano Maria Laura Martorana has received many awards over the years, including the prestigious ‘Singer of the Year’ prize at the 1996 Festival of Martina in Italy. She has participated in the recording of numerous operas, and sang the role of Cleonilla in the 2008 recording of Vivaldi’s Ottone in Villa for Brilliant Classics.