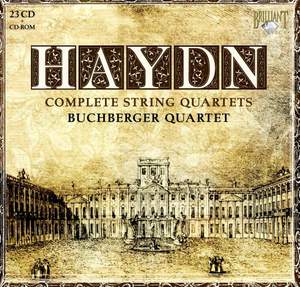 I. Adagio with Variations

A major recording project that will receive extensive review coverage in the major magazines.

Comprehensive PDF booklet essay on the music, the interpretations, sources and research.

Haydn’s string quartets span his creative life – from the 1750s and the Opp. 1&2 sets through to his last unfinished quartet in D minor Op.103 of 1803. When the first quartets were written Bach had been dead only a few years and Handel had five years to live. When the last quartet was being worked on, Beethoven had finished his ground breaking Third Symphony. Arguably, Haydn’s greatest contribution to music is as the father of the string quartet rather than his oftgiven title as ‘Father of the Symphony’. His quartets developed from divertimenti and cassations, which were little more than light music for the entertainment of wealthy patrons and royalty, to some of the most profound and visionary music by any composer. In the same way as Bach’s ‘48’ have been described as a summation of all that had gone before, and the major influence upon all that would follow, Haydn’s quartets chart the development of the medium from ‘background’ music of high quality, to the major art form of the later works. They influenced Mozart, Beethoven, Schubert, Brahms, Schoenberg and beyond spanning the end of the Baroque, the Classical period in its entirety and the beginning of the Romantic age.

During his lifetime, the world had seen huge social and political upheavals – the French Revolution, the Napoleonic Wars which had been fought across Europe (reflected upon in ‘Mass in Time of War, and the Nelson Mass), and the foundation of the United States of America in 1776. Acutely aware of the politics of his age, Haydn’s development as a composer reflects these turbulent times.

Any cycle of the Haydn String Quartets is a major achievement. The Buchberger Quartet’s interpretations are based on scrupulous research into sources – both contemporaneous and modern, and interpretational style – dynamics, repeats and tempi. This complete recorded cycle is the culmination of a five-year project which has seen the Buchbergers perform all the quartets with illustrated talks and introductions to each work.