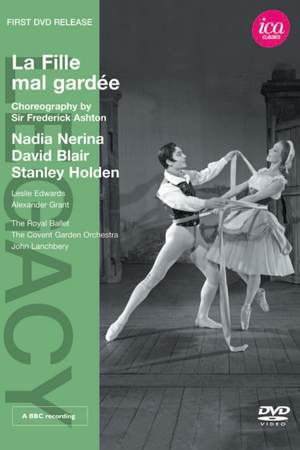 Featuring the original cast of Ashton's heart-warming romance, this 1962 black and white film is a treasure. Nerina and Blair are sprightly, and there's a touch of genius to Grant's Alain. — BBC Music Magazine, January 2013, 5 out of 5 stars More…

La Fille mal gardée – or The Badly Guarded Girl – is one of the best loved comic ballets of all time.

Said to have been inspired by Pierre Antoine Baudouin’s 1789 painting, La Réprimande/ Une Jeune Fille Querellée par Sa Mère, and first presented at The Grand Theatre de Bordeaux, France, on the 1st July of the same year, its refreshing simplicity and boisterous radiance has established it as a popular choice in the repertory of ballet companies the world over, centuries after it was first created.

This DVD showcases Frederick Ashton’s version – widely regarded as the definitive interpretation – initially devised for the London Royal Ballet in 1960 and first screened on the BBC over the Christmas period of 1962.

This performance featured the cast of the 1960 original, with Nadia Nerina in a role that Ashton created with her in mind. Nerina’s “joyous, soaring skill, which is Lise’s signature” (Financial Times) and David Blair’s technical and interpretative genius in the role of Colas are perfectly offset by Stanley Holden’s hilarious travesti turn as Widow Simone, and Alexander Grant, who brings pathos and humour to the character of Alain.

The score perfectly complements Ashton’s whimsical choreography. La Fille mal gardée is at once energetically fresh and quaintly naïve, and this DVD is testament to the youthfulness and vibrancy of Ashton’s version of this timeless ballet.

The talents of Nadia Nerina have also been seen on ICAD5030 (Giselle), and more recently on ICAD5058 in a performance of Coppélia.

Featuring the original cast of Ashton's heart-warming romance, this 1962 black and white film is a treasure. Nerina and Blair are sprightly, and there's a touch of genius to Grant's Alain.

The importance of this BBC film, recorded for broadcast at Christmas 1962, is that it preserves the performances of the original Covent Garden cast, all still at their prime...Pocket spitfire Nadia Nerina is all flighty runs and cheeky grins, while David Blair proves equally adept at both romantic ardour and, especially, communicating a sense that he is having great fun.