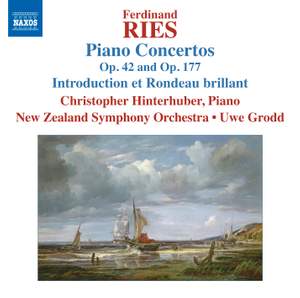 Despite his admiration for Beethoven, Ries seems closer to Hummel in these elegantly turned out Concertos. Hinterhuber and Grodd are engaging advocates. — BBC Music Magazine, Christmas 2012, More…

The fourteen works for piano and orchestra of Ferdinand Ries stand alongside those of Hummel as the finest and most important of their kind from the early decades of the 19th century. Intensely lyrical and yet displaying at times a rugged Beethovenian grandeur, Ries’s eight concertos are works of impressive musical stature. In this fifth and final recording we encounter the first and last of his published concertos and the virtuosic Rondeau brillant, Op. 144. “Sparkling performances… the recording is first rate.” (Penguin Guide on Vol. 3, 8570440).

Despite his admiration for Beethoven, Ries seems closer to Hummel in these elegantly turned out Concertos. Hinterhuber and Grodd are engaging advocates.

Grodd offers...an imposing exposition, taken up by Hinterhuber who is equally aware of its quality. 'Skilful industry' wasn't Ries's only attribute.