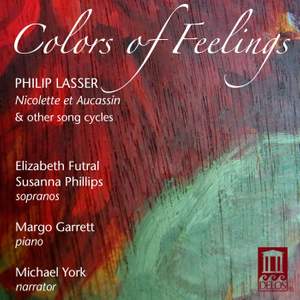 Lasser: In Colors of Feelings

I. Death of the Muse

III. You Sing for Me

IV. When Our Hearts Were Young

Thus mused distinguished American composer and Juilliard faculty member Philip Lasser, by way of introduction to these world premiere recordings of three lovely and evocative cycles for voice(s) and piano. In Colors of Feelings offers vivid settings of four moving poems by handicapped Tennessean writer Wynelle Ann Carson, who died tragically young. Les Visages de l’Amour treats six varied poetic visions of love by four remarkable French-language poets (including Lasser himself). Nicolette et Aucassin is a fascinating, one-of-a-kind synthesis of ancient and modern for two sopranos and narrator that was inspired by a Medieval French “Chantefable” (sung fable). The original anonymous manuscript contains both the story and the melodies upon which the composer’s music is based.