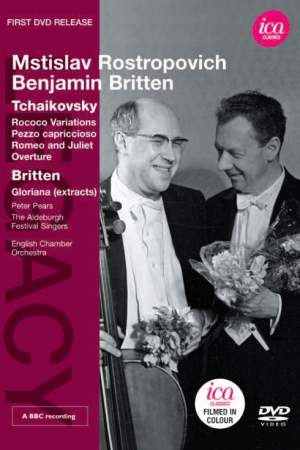 it is a joy to see the two musicians in partnership. Britten sympathetically accompanying with the ECO...The 'bonus' is a real treat: Britten conducting excerpts from Gloriana...both chorus and... — BBC Music Magazine, January 2013, More…

“These recordings represent an overview of twenty of the most heady years of Mstislav Rostropovich’s career, during which he made his name in the West, was exiled from his homeland for his support of dissident artists, poets and musicians, and established himself as a major international force for (not just the musical) good.” (Chris de Souza)

Introduced to Britten through Shostakovich, his teacher, Rostropovich formed a close partnership with the British composer – as evident here in their collaborative performances from the opening concert of the new Snape Maltings Concert Hall, which includes rare audiovisual footage of the Maltings before it was destroyed by fire in 1969 and rebuilt.

Rostropovich’s Aldeburgh performance of Variations on a Rococo Theme displays him at the peak of his powers and is a wonderful example of his partnership with Britten, of whom this is rare conducting footage.

The excerpts from Britten’s opera Gloriana (the contemporary poetic name for Elizabeth I), included as the bonus of this DVD, are a highly significant addition to the composer’s discography. While Britten conducted recordings of most of his operas on disc, Gloriana was not one of them, so this is the only hint we have of his approach to any of the score. The well-chosen sections, forming an unusual concert suite, include The Lute Song performed by Peter Pears.

This is the first release of this material on DVD, and is available in time for the Britten centenary in 2013.

it is a joy to see the two musicians in partnership. Britten sympathetically accompanying with the ECO...The 'bonus' is a real treat: Britten conducting excerpts from Gloriana...both chorus and orchestra are fully alert to Britten's every gesture - a truly electrifying performance