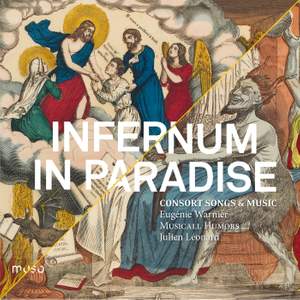 A seductively programmed and sumptuously realised anthology of music for viol consort and voice that conveys the Elizabethan psyche in all its melancholy and amorous playfulness. Pity the words... — BBC Music Magazine, April 2013, 3 out of 5 stars More…

anon.: When Daphnee from Fair Phoebus Did Fly

Holborne: The Tears of the Muses

anon.: Sweet Was the Song the Virgin Sung

Dowland: If My Complaints Could Passion Move

Dowland: The Earle of Essex his Galliard

anon.: When May is in his prime

Holborne: The Fairy Round

Holborne: The Image of Melancholy

"Beer and the viola da gamba both arrived in England in the space of a year, in the reign of King Henry VII”, wrote Henry Peacham. And yet it was not until the following reign, that of Henry VIII, that the latter instrument gained its noble status. The high point, however, occurred in the long reign of Elizabeth I (1558-1603).

The consort song had its origin partly in the theatre, partly in madrigals inspired by the Italians, then very much in vogue. Fashionable English composers write songs, airs and dance pieces that would embody this uniquely English phenomenon; among them John Dowland and Anthony Holborne, who feature prominently on this disc, both leading figures in Elizabethan music. With his ensemble Musicall Humors, Julien Léonard has managed to create a viol consort of astonishing homogeneity, offset by the delicate presence at times of a lute, at times of a cittern, a harpsichord, the virginals or organ. The sonorities are round, warm, velvety, and for her first solo disc, the voice of Eugénie Warnier lies with unforced delicacy upon this instrumental duvet.

A seductively programmed and sumptuously realised anthology of music for viol consort and voice that conveys the Elizabethan psyche in all its melancholy and amorous playfulness. Pity the words are often indistinct.

This is an attractive and well-contrasted recital of Elizabethan and Jacobean viol consort music and songs...All are played with a rare warmth and intimacy.