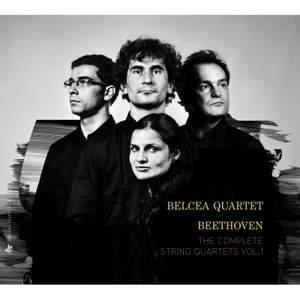 They play with extraordinary strenuousness, very unlike the Alban Berg Quartet with whom they studied. The Belceas re-enact the creative torments of the composer to a degree where you feel their... — BBC Music Magazine, February 2013, 4 out of 5 stars More…

Recording of the Week,  Belcea Quartet launch their Beethoven cycle

Excellent ensemble and complete sympathy and understanding between the players are the hallmarks of this projected complete cycle by the former BBC New Generation Artists, who have been winning plaudits galore for their live performances of these works over the past few years.

In 2001, Zig-Zag Territoires had already perceived the singularity as well as the potential of this ensemble, which had just won the Bordeaux International Quartet Competition. That first encounter had resulted in a very fine disc devoted to the quartets of Janaček, widely hailed by the critics (Diapason d’Or).

In the ensuing eleven years, the Belcea Quartet built up a large repertoire and initiated a discography with our colleagues at EMI that attracted considerable attention. Thus this is a particularly propitious moment to implement a new, confident, long-term partnership between Belcea and ZZT.

This collaboration is beginning with a complete recording of the Beethoven Quartets, a founding cycle if ever there was one.

The Belcea Quartet began a worldwide tour focussing on this cycle that will continue through the end of the 2012-13 season.

They play with extraordinary strenuousness, very unlike the Alban Berg Quartet with whom they studied. The Belceas re-enact the creative torments of the composer to a degree where you feel their instruments might suffer...the magnificent cellist Antoine Lederlin cultivates a roudned tone, even under pressure, but the overall effect is of a lean, muscular sound

I'm particularly impressed by the Belcea's close attention to dynamics...Their playing may have a very different sound from the string quartets of Beethoven's day but the way the music breathes and moves gives a clear picture of his intentions...this promises to be an outstanding set - not the last word on these endlessly fascinating works, perhaps, but performances of great artistry and perception.

This is really very fine quartet playing, with excellent ensemble and complete sympathy and understanding between the players. They’re not afraid to change their sound frequently and sometimes violently to best express the nature of the music, and the sweetest, most singing and beautiful tone is made all the more so when contrasted against the earthy, grainy sonority at other moments.