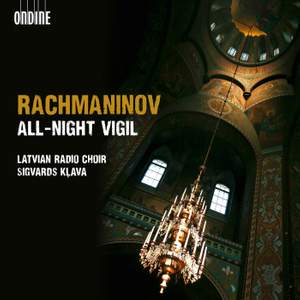 the Rachmaninov of Latvia's outstanding professional choir presents a golden mean between the uniquely open-throated but not always pitch-perfect Glinka Choir of the hallowed St Petersburg tradition,... — BBC Music Magazine, March 2013, 4 out of 5 stars More…

Blessed is the man

Hexapsalms: Glory to God on high

Glorifying song of the Resurrection: Teach me O lord in the way of truth

Hymn of Resurrection: We have seen the resurrection

Magnificat: My soul proclaims the greatness of the Lord

Great Doxology: Glory be to God on high

Resurrection hymn (Troparion): This day of salvation has com to the world

Resurrection hymn (Troparion): When you had risen

The All-Night Vigil is composed for unaccompanied voices but Rachmaninov created a work of such richness that it can be described as “choral orchestration”, demanding a wide vocal range from the singers.

The Latvian Radio Choir is regarded as one of the top professional chamber choirs in Europe. Their repertoire extends from the Renaissance to the present day, but always focussing on exploring the capabilities of the voice and seeking to push its limits.

Sigvards Kļava, Chief Conductor and Artistic Director of the Latvian Radio Choir since 1992, is one of Latvia’s most prolific choral conductors. He has conducted many premières of new choral works by Latvian composers.

the Rachmaninov of Latvia's outstanding professional choir presents a golden mean between the uniquely open-throated but not always pitch-perfect Glinka Choir of the hallowed St Petersburg tradition, and the more reserved tones of English choral contenders...this performance is a remarkable achievement

Klava's interpretation doesn't give the sensation of dragging...He carefully draws out every dramatic nuance from this choral feast. His two dozen singers produce a well-nourished tutti and sound like a much larger group...There is a wonderfully kaleidoscopic (though carefully graded) palette of vocal colours throughout...The Latvians' unanimity of attack is well-nigh perfect...This is a sublimely beautiful yet rapturous recording.

You would need to go far to hear a richer, more rounded alto section than this. They are supported by a wonderfully firm bass line...you want to single out each section for particular praise: the gloriously clear-toned and vital sopranos an the ardent, sweet-voiced tenor section.

Often hailed as the crowning musical achievement of Russian Orthodox Christianity, Rachmaninov's All-Night Vigil has certainly become a firm favourite among choirs in both East and West. Based on various forms of chant that were in use in Russia at that time, it uses these as the building-blocks of a unique and powerfully Romantic harmonic language. The Latvian Radio Choir under Sigvards Kļava give a performance that is the equal of any by Russian choirs!

Under the masterly direction of Sigvards Klava, the Latvians display the barrel-chested Slavonic tonal resources Rachmaninov would have expected — sepulchral basses, soft-grained but strong sopranos, tenors who soar without strain — but also a precision alien to Russian choirs