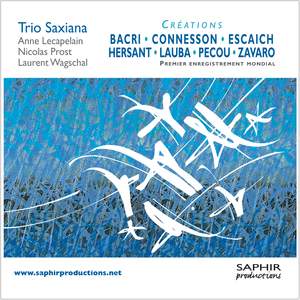 Since its invention by the Belgian instrument maker Adolphe Sax in 1841, and despite all his efforts to introduce it into military bands and symphony orchestras, we must acknowledge that, unfortunately, the saxophone has not overly aroused the interest of composers. Certainly, thanks to Miss Elisa Hall, who, in the early 20th century, commissioned some twenty-odd scores, saxophonists can take pride in having concertante pieces by Debussy, Vincent d’Indy and Florent Schmitt in their repertoire. Later on, Milhaud, Glazunov, Martin, Villa-Lobos, Ibert and, more recently, Berio, Donatoni and Thierry Escaich would write for the saxophone. As regards chamber music, it is doubtless the quartet form that has given rise to the most interesting pieces as attest, in particular, the scores by Glazunov, Pierné, Schmitt, Xenakis, Glass and the considerable discography that illustrates them. In addition to the repertoire for saxophone and piano—fairly extensive but quite varying in quality (Koechlin, Hindemith, Carter, Sancan, Sauguet, Denisov)—, we can also point out interesting pieces by Caplet, Villa-Lobos, Jean Cras, Nono and Wolpe, using the saxophone in original combinations with other instruments. In the final analysis, many attempts are unfortunately too anecdotal to give the saxophone a real literature, whereas in jazz bands, it quickly gained extraordinary and lasting success.

When, in 2000, they formed the Saxiana Trio, Anne Lecapelain, Nicolas Prost and Laurent Wagschal were able to come up with only a very small number of original works for two saxophones and piano. We can mention, in particular, the first piece in history written for this formation, in 1858: the Duo concertant by Jean-Baptiste Singelée (1812-1875). Saxiana initially built up a repertoire by realising transcriptions after deciding to never play works that predated the birth of the saxophone and favouring those composers who used or defended the instrument. Thus, these are essentially 20th-century works, and the musicians most often play in the configuration combining soprano and tenor saxophones with piano, Nicolas Prost and Anne Lecapelin also able, depending on the piece, to use the alto and baritone.