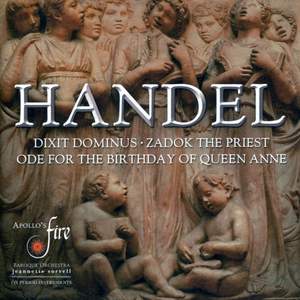 Handel: Dixit Dominus, Ode for the Birthday of Queen Anne & Zadok the Priest

Let All the Winged Race With Joy (Air)

The Day That Gave Greart Anna Birth (Air and Chorus)

And All the People Rejoic'd

God Save the King!

VII. De torrente in via (Chorus)

Apollo's Fire under founder-director Jeannette Sorrell showcases its chorus in a selection of works by Handel, including Dixit Dominus, Ode for the Birthday of Queen Anne, and Zadok the Priest.

Apollo's Fire with founder-director Jeannette Sorrell has won widespread critical acclaim with their half-dozen releases on AVIE. Most recently they released two adventurous albums that explored the byways of historically informed performance practice: early Americana on Come to the River (AV2205) and ancient Celtic Christmas music on Sacrum Mysterium (AV2269). Returning to their baroque roots, they offer a selection of works by Handel that showcases the Apollo's Fire Chorus. The centrepiece of the album is the grand Dixit Dominus written during the composer's early days in Rome. In a gesture to Queen Elizabeth II's Diamond Jubilee year, Sorrell has chosen two works written for the monarch's forbearers - the Ode for the Birthday of Queen Anne which celebrated that sovereign's birthday in 1713, and Zadok the Priest composed for the coronation of King George II in 1727. As a bonus, Sorrell includes "The Lord Shall Reign" from the epic Israel in Egypt.