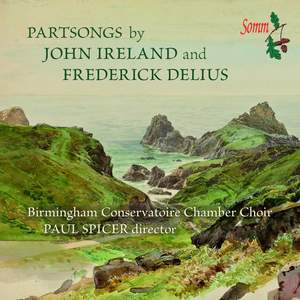 [the choir] perform them with admirable tuning and ensemble...There is equally admirable direction by Spicer, too, who applies the minutiae of his choral dexterity to a responsive and surprisingly... — Gramophone Magazine, February 2013 More…

No. 6. Her ute skal gildet staa

No. 1. An den Sonnenschein

Ireland: Fain would I change that note

Ireland: When May is in his prime

Having been born and spent his young years in Bradford, Delius grew up with the sound of choral song and he composed Partsongs with great ease.

The early ones have German texts (with English translations) and the gem is the beautiful “On Craig Ddu” -- one of Delius’s early choral masterpieces.

John Ireland too, made a significant contribution to the genre and he shares with Delius the gift of lyricism and colour. Heraclitus, Twilight Night and Immortality being among his most delightful.

The Birmingham Conservatoire Choir under Choral Director Paul Spicer sings them beautifully and with great verve.

[the choir] perform them with admirable tuning and ensemble...There is equally admirable direction by Spicer, too, who applies the minutiae of his choral dexterity to a responsive and surprisingly mature choral sound.

The 24 voices of the Birmingham Conservatoire Chamber Choir can boast in particular a marvellous top line; but truth to tell, they also blended ideally across the range: the partsongs collected here have evidently and without a single exception been rehearsed by choir and conductor to perfection.