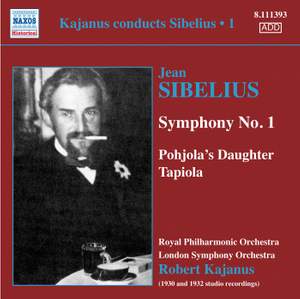 Jean Sibelius wrote that “there are none who have gone deeper and given [my symphonies] more feeling and beauty than Robert Kajanus”. The nobility and affection in this première recording of the First Symphony makes it uniquely cherished amongst Sibelius aficionados. Pohjola’s Daughter is a supreme masterpiece, filled with brooding atmosphere and tension, and Tapiola is a graphic evocation of destructive climate and landscape. This is the first of three volumes containing Robert Kajanus’s complete Sibelius recordings.