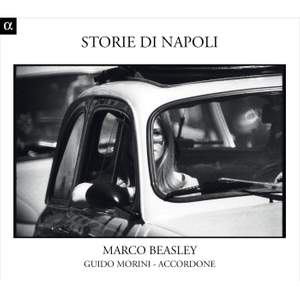 This programme of Neapolitan music, covering a vast historical span (from the Renaissance to the 20th century) is a 'manifesto' of the musical influences that have nurtured Marco Beasley. Guido Morini's arrangements, written especially for him, make the programme particularly appealing.

In addition, it offers an original coherence by setting up 'bridges' between genres that are sometimes opposed from a musicological point of view but which have continued to provide food each other.

For the first time, the musician explores the paths of crossover in the broadest sense and without complex: here, Marco Beasley confirms his nickname of 'the Baroque crooner' con brio. He also opens up new ways, proposing original orchestrations and making his a part of the colossal heritage that has influenced the modern cultures of the western world.