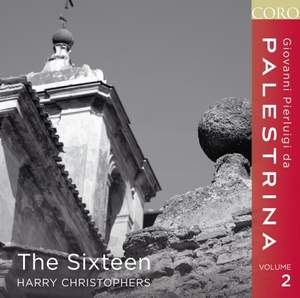 The Sixteen are at their best in jubliant passages of celebration...In some of the motets the singers make the most of the word painting: they skip along the running melodies at the word 'curremus'... — BBC Music Magazine, February 2013, More…

Following the success of the first volume in their Palestrina series which won the International Classical Music Award for Early Music, Harry Christophers and The Sixteen release the second recording in the series which has a Christmas theme.

Palestrina was born in 1525 not far from Rome, in the town whose name he bore and from which we take the cover images for this series of discs.

Possibly the greatest composer of liturgical music of all time, Palestrina was a towering figure in Renaissance polyphony. Choral singers world-wide will know his Missa Papae Marcelli (recorded by The Sixteen on COR16014) as, without doubt, it is the most renowned of Palestrina’s works and possibly the most famous mass of all time.

Each volume in this series is based around a single mass and theme relevant to that mass, in this case the Nativity and the festive Motet and Mass Hodie Christus Natus Est. The mass features alongside some of his settings of the Song of Songs as well as the Magnificat Quinti toni and Motet O magnum mysterium.

The Sixteen are at their best in jubliant passages of celebration...In some of the motets the singers make the most of the word painting: they skip along the running melodies at the word 'curremus' in Osculetur me osculo; and in Nigra sum the lines jostle each other out of the way at the reference to fighting.

The Sixteen let the music speak for itself, as they say. Festive spirit is here more a matter of inner feeling than outward show, as the repose of the Credo's inner movements testifies...It is done with the ensemble's near-immaculate poise and onn this showing their Palestrina cycle will rival (but also, I hope, complement) the Tallis Scholars'.