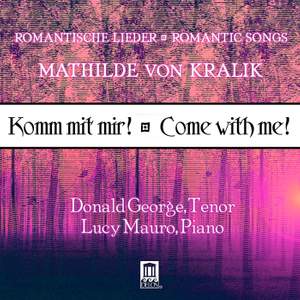 Kralik: Du bist mein (You are mine)

Richard von Kralik: Ich bin nur ich (I am only me)

Richard von Kralik: Sage, Sonne, wo sie nun ist (Tell me sun, where she is now)

Kralik: Im Grünen (In the Woods)

“The young lady’s composition … surprised us in the most pleasant way … we consider Miss Kralik to be a genuine, original talent which … holds great promise for the future.” Eduard Hanslick; Neuen Freien Presse, April 19, 1878

In keeping with Delos’ emerging tradition of bringing the worthy music of unjustly neglected composers again to light, we offer here the premiere recording devoted to the vibrant and engaging art songs of Mathilde von Kralik (1857-1944): a most accomplished and appealing composer whose music is ripe for rediscovery. A prized student of Bruckner at the Vienna Conservatory (where she also met Mahler), she graduated first in her class in an era when women’s creative abilities were largely scorned. Also an accomplished pianist and singer, she went on to become a leading figure in Viennese artistic life.

Working very closely with her like-minded older brother Richard, she composed in multiple genres – setting more than 120 of his poems and texts in her distinctly late-romantic songs, choral works and operas; the bulk of the texts used in this collection are from him. In this recording, von Kralik has gained ardent champions in tenor Donald George and pianist Lucy Mauro. Their inspired performances will convince you that her meticulously crafted, highly original and startlingly beautiful music deserves to be ranked alongside that of much better known Lieder composers of her day, like Mahler and Hugo Wolf.