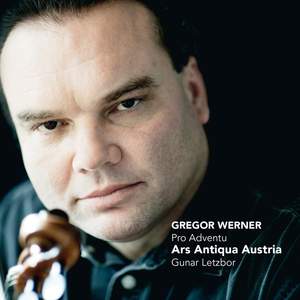 This latest release from the outstanding period music ensemble Ars Antiqua Austria and its founder and musical director Gunar Letzbor concentrates on the music of the early 18th century composer Gregor Werner. The sound world of Werner’s music is firmly rooted in the baroque style, since he was disparaging of the new “classical” approach being developed by the likes of Joseph Haydn.

Gregor Werner (1695-1766) began directing the fortunes of the Esterházy court band, the Hofkapelle, on 10 May 1728. He wrote 40 Masses, three Requiems, three Te Deums, four Offertories, 12 Vespers, 12 Good Friday oratorios, approximately 18 oratorios, 133 antiphons and a multitude of instrumental pieces and minor works. All of his music reveals the early a-cappella style as well as the Baroque concertante style of the turn of the century, and throughout his life he remained true to the idiom of Baroque music-making, refusing to adapt in any way to new fashions.

Ars Antiqua Austria was founded in Linz in 1995 with the aim of introducing audiences to the roots of Austrian baroque music played on period instruments. The core of Ars Antiqua Austria comprises eight musicians directed by Gunar Letzbor. The ensemble is readily augmented to accommodate a still wider repertoire. Previous recordings by Ars Antiqua Austria on Challenge Classics include discs devoted to the music of Charles Mouthon (CC72336), Karl Kohaut (CC72323), Johann Joseph Fux (CC72381), and most recently music for chalumeaux by Christoph Graupner.