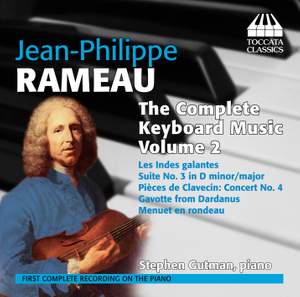 Rameau is widely acknowledged as one of the world’s major composers, but whereas pianists are happy to play music by his contemporaries Bach, Handel and Scarlatti, they have largely ignored Rameau’s glorious output for keyboard.

This series (this is the second of three CDs) aims to remedy that shortcoming by recording all of Rameau’s music for keyboard – the first ever to do so.

The pianist, Stephen Gutman, is a specialist in French and Baroque music and his expertise produces readings that satisfy the stylistic requirements of the music and exploit the sonorities of the modern concert grand.