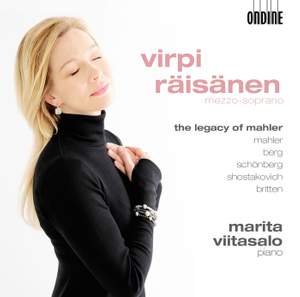 With a Nordic timbre suggesting a genetic kinship with Karita Mattila, Räisänen's instrument is clear, clean and beautifully produced from a technical standpoint, with an extra something that's... — Gramophone Magazine, Awards Issue 2012 More…

Shostakovich: 2 Fables of Krilov, Op. 4 (arr. for voice and piano)

No. 2. The Donkey and the Nightingale

Britten: A Charm of Lullabies for mezzo-soprano and pianoforte, Op. 41

No. 2. The Highland Balou

Ondine is pleased to announce the debut release of charismatic mezzo-soprano Virpi Räisänen.

Having already performed as a successful violinist, Virpi Räisänen has since appeared as a singer at the Staatsoper in Berlin, the Amsterdam Concertgebouw, the Netherlands Opera and the Salzburg Festival with the Vienna Philharmonic Orchestra under the baton of Ingo Metzmacher in Nono’s opera Al gran sole carico d’amore in 2009 and in the premiere of Wolfgang Rihms’s Dionysos in 2010.

Virpi Räisänen is equally at home with contemporary and baroque music with her beautiful timbre able to fit well with all genres.

Pianist Marita Viitasalo has performed extensively as Soile Isokoski’s accompanist, performing with her in recitals across the world since 1987. She plays chamber music in the Trio Finlandia and appears regularly with Scandinavian orchestras.

With a Nordic timbre suggesting a genetic kinship with Karita Mattila, Räisänen's instrument is clear, clean and beautifully produced from a technical standpoint, with an extra something that's initially hard to put your finger on. Then, as the recital goes on, you realise a violinist's sensibility is at work...As much as her sound recalls Mattila, her vocal line is like Felicity Lott's...it's a highly impressive calling-card.

the precision of Raisenen's singing is most impressive, although it doesn't come across as cold or overly technical...Her sound is bright on top and her lower register is rich without being matronly. She is idiomatic in German, Russian and English...The only thing that I miss in her singing is communicative warmth and intimacy...Here is a singer to keep an ear on.