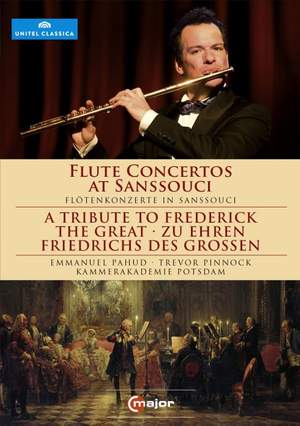 A Tribute to Frederick the Great

Quantz: Capriccio in B major

Emmanuel Pahud, principal flutist of the Berliner Philharmoniker, celebrates the 300th birthday of Frederick the Great with a concert recorded in the historic Royal Theater of the Neues Palais Potsdam, one of the architectural gems within the world-heritage palace ensemble of Sanssouci built by the Prussian king.

Trevor Pinnock is one of the pioneers of the modern revival of early music performance and he appears as a guest conductor with many of the world's leading symphony orchestras. Emmanuel Pahud is one of today's most exciting and adventurous musicians. Accompanied by the Kammerakademie Potsdam, Phaud and Pinnock perform works by C.P.E Bach, Franz Benda, Johann Joachim Quantz and a composition written by Frederick the Great himself.