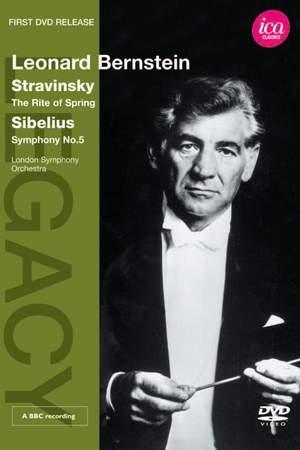 Thrilling performances from 1966. The Rite generates tremendous tension, while the Sibelius is liked for drama and lyricism. No wonder Bernstein starts as Jekyll and finishes looking like Hyde. — BBC Music Magazine, December 2012, More…

‘Luckily for all of us, it wasn’t enough for Leonard Bernstein to compose music and conduct orchestras. He felt equally compelled to talk about music – to try and explain what made it tick, what made it good, and what made it affect us in all the ways that music does. The other piece of good luck was that Leonard Bernstein and television came along at the same time. They were born for each other.’ (Jamie Bernstein)

The films on this DVD are taken from the ‘Symphonic Twilight’ series of TV programmes made in the mid-Sixties that were the brainchild of Humphrey Burton, then the newly appointed Head of Music and Arts Programmes for the BBC.

In his booklet notes for this DVD, Burton reveals himself to have been instrumental in bringing Bernstein the conductor to the wider British public, who knew him foremost as the composer of West Side Story. In 1965 Burton persuaded Bernstein to conduct the LSO at the Royal Albert Hall and the resulting Mahler 8 was a spectacular occasion, broadcast to the nation.

The following year, they put together these programmes, filmed specifically for the new television audience. The works Bernstein chose to record are twentieth-century orchestral masterpieces, for which he is known to be a champion. His recordings of Sibelius’s Fifth Symphony for CBS Records and Deutsche Grammophon were acclaimed by critics worldwide, and his interpretation of The Rite of Spring in 1959 elicited an enthusiastic ‘Wow!’ from Stravinsky himself! They are accompanied on this DVD by an in-depth interview, given here as a bonus and subtitled in French and German.

Thrilling performances from 1966. The Rite generates tremendous tension, while the Sibelius is liked for drama and lyricism. No wonder Bernstein starts as Jekyll and finishes looking like Hyde.