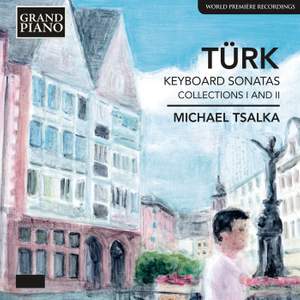 Daniel Gottlob Türk is best known for his influential pedagogical treatise Klavierschule (1789). His 48 inventive and varied keyboard sonatas were influenced by Sonatas of other North German composers such as C. P. E. Bach and J. W. Hässler. The five historical keyboards employed in this recording reflect the diversity of the instruments available in Türk’s day. The twelve sonatas encompassed in his first and second collections show how the composer’s sensitive, at times dramatic, oratorical style relates beautifully to the nuanced expressive capabilities of these instruments.