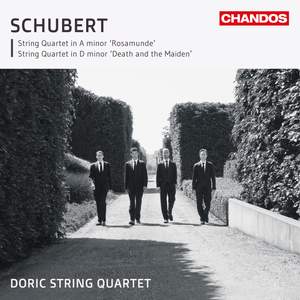 The Doric Quartet play with passion, but there is relaxation, even wit, in both these works, and the Doric seem to be eager to stress the prevailing darkness at the expense of warmth and lyricism,... — BBC Music Magazine, December 2012, 4 out of 5 stars More…

On this new release, the Doric String Quartet turns to the music of Franz Schubert. It is the Quartet’s fifth release for Chandos, and the discography has gone from strength to strength. MusicWeb International said of the recent Korngold release (CHAN10707): ‘The Doric Quartet seem to have a Midas touch, and any repertoire they commit to disc comes out sparkling’. Their Schumann release (CHAN10692) was ‘Recording of the Month’ in both Gramophone and BBC Music Magazine.

In March 1824, despite describing himself as ‘the most unhappy and wretched creature in the world’, Schubert completed not only the great Octet, but also the two String Quartets recorded here.

The String Quartet in D minor is considered the greatest of Schubert’s late quartets, mainly on account of its raw emotional honesty, which reaches an almost unendurable pitch in the second movement, a set of variations based on Schubert’s song Der Tod und das Mädchen. All four movements are driven by extensively repeated rhythmic figures, reminiscent of the musical style of Schubert’s great idol, Beethoven.

Full of Schubertian ambivalence, the String Quartet in A minor is a deeply intimate work. The opening, expressing brooding sadness, is played by the first violin over a restless accompaniment, and subsequently interrupted by flurries of almost manic energy. In the second movement, Schubert ‘borrowed’ the main melody from the second Entr’acte of his incidental music to the play Rosamunde, Fürstin von Zypern (1823) by Wilhelmine von Chézy.

The Doric Quartet play with passion, but there is relaxation, even wit, in both these works, and the Doric seem to be eager to stress the prevailing darkness at the expense of warmth and lyricism, which is so notable in the A minor Quartet. They play with notably little vibrato, so the impression of coolness is increased.

The Dorics have enormous flair for this kind of music, getting comfortably under the skin of music written by Schubert when he was about the same as their average age and displaying a similar degree of maturity and insight

imaginative and exciting...The A minor’s opening shows the Doric’s alertness to the quintessentially Schubertian combination of nervous, obsessive rhythm and songlike melodic lines...The D minor is very fine, culminating in a tingling presto finale whose whispered, ghostly pianissimos make the sudden outbursts all the more ferocious.