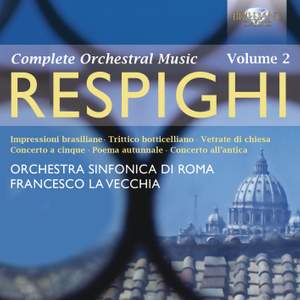 No. 2. Butantan (In a snake-garden near Sao Paulo)

I. La fuga in Egitto (The Flight into Egypt)

The second instalment of the Complete Orchestral Works of Ottorino Respighi contains a wealth of the slightly lesser known works (the most famous of course being the Roman Trilogy, issued in the first volume) of the highest quality: the luminous Vetrate di Chiesa (Church Windows), the blazing and intimate Trittico Botticelliano (after the great paintings of Botticelli), and the beautiful works for violin and orchestra (Poema Autunnale, Concerto all’antica). The first volume of the Respighi series (Brilliant Classics 94392) met already with great critical acclaim.The Orchestra Sinfonica di Roma and maestro Francesco La Vecchia have recently won several awards for their recordings (Diapason d’Or, Choc de Classica, etc). New recordings, newly written liner notes, by an Italian specialist. The second 2CD volume of Respighi’s orchestral music (of a projected four from the Rome orchestra) focuses on the concerto form, and on Respighi’s relationship with early music. He was a pioneer in this field, and applied Renaissance rhythms and harmonies to the vocabulary and instrumentation of Richard Strauss’s idiom, both in small (Antique Airs and Dances) and large forms (the early Concerto all’Antica). The Poema Autunnale is a more freeflowing, rhapsodic development of the violin concerto form, moody and with a touch of melancholy as befits the season.

On CD1 we find the sultry sounds of Respighi’s ‘Brazilian Impressions’ (composed after a 1927 tour to South America) evoking a tropical night, Carnival dances and even the mighty indigenous snakes (which he saw in a Reptile institute).

The four ‘Church Windows’ are hardly more chaste in effect, such is Respighi’s love of voluptuous orchestration. ‘Respighi's sizeable orchestral output has only latterly come into its own on disc and this release from Brilliant is announced as the first volume of a complete traversal. It gives a pertinent overview, moreover, of the twin aspects that inform the composer's thinking throughout his maturity: namely Italy's scenic and musical past... La Vecchia secures eloquently wrought readings.’ Gramophone, June 2012, reviewing the first volume of the series.