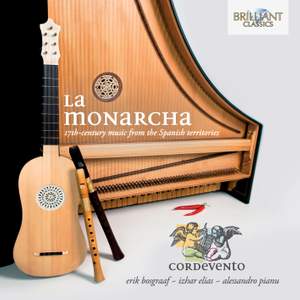 A new and innovative concept by Erik Bosgraaf and his friends: dance music from the Spanish territories in the 17th century, by famous and anonymous composers, constantly crossing the borders between the serious and the playful, between “art” music and “light” music. Listening to this wonderful program, played with such obvious fun, zest and drive, one feels that music has this eternal quality of uplifting one’s soul, spirit and body, whether written 400 years ago or right at this moment. Erik Bosgraaf, Izhar Elias and Alessandro Pianu play on original instruments or copies thereof. Their earlier releases on Brilliant Classics have gained international praise for their originality and dedication, resulting in important prizes such as the Prize from the Borletti Buitoni Trust. This collection draws directly from the works of Italian and Spanish guitarists Girolamo Montesardo, Carlo Calvi, Gaspar Sanz, Santiago de Murcia and Francesco Corbetta, keyboard players Antonio de Cabezón, Bernardo Storace, Jan Pieterszoon Sweelinck and Pieter de Vois, and authors of solo and chamber music for a variety of other instruments, Andrea Falconieri, Bartolomé de Selma y Salaverde and Jacob van Eyck.

Emblem and ambassador of Spanish culture, it is the guitar that threads the story together, intrinsically intertwined with the Spanish fondness for variation sets on harmonic grounds. Spain’s imperial history explains the wide geographical variety of composers, though even the Dutch Sweelinck seeks to bring local colour to his sober Low Countries aesthetic in his Pavana Hispanica. Elsewhere there are variations on the perennially popular ‘La Follia’, jolly Correntes and tarantellas, and more sinuous diferencias and intabulations of love-songs. They are all performed by a trio of young and talented musicians who bring great rhythmic vitality and a freshly imaginative approach to this inventive act of reconstruction.