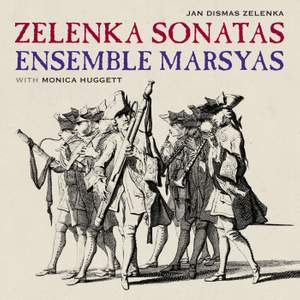 it's the group's nuance that's transfixing. When textures become sparse, delivery intensifies; when the line expands, the tempo stretches; when counterpoint thickens, articulation is leavened.... — BBC Music Magazine, November 2012, 5 out of 5 stars More…

These sonatas represent the most spectacularly challenging music ever written for wind instruments in terms of their utopian demands on the technique of the players, their musical integrity and their breathtaking scale.

This repertoire saw the ensemble awarded both first prize and the audience prize at the 2007 Brugge International Competition.

The Edinburgh based chamber group comprises the best of a new generation of musicians specialising in early music from across Europe.

They are joined for this recording by Baroque violinist Monica Huggett who is a multiple Gramophone Award winner and Grammy nominee.

The members of Ensemble Marsyas have been awarded accolades by both critics and the recording industry alike - the most recent including a 2010 Gramophone Award for a recording featuring Peter Whelan.

it's the group's nuance that's transfixing. When textures become sparse, delivery intensifies; when the line expands, the tempo stretches; when counterpoint thickens, articulation is leavened. The players are audibly intelligent, at once humorous and illuminating. Non-interventionist engineering shows that less can be more when the artists are first-rate.

There is highly capable playing, with expert tuning, smooth lines, and techniques apparently taxed only by the quickfire repeated notes in Sonata No. 6. The sound is also wonderfully clear and well balanced.

The lively Ensemble Marsyas are joined by violinist Monica Huggett in the third of the set, full of literally breathless counterpoint, while at the end is a beguiling single slow movement that leaves us up in the air, as if I had finished this review with a question mark.