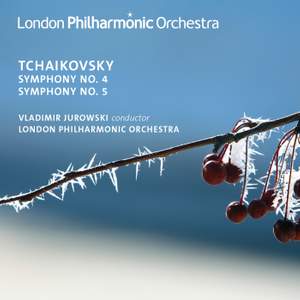 I especially enjoy the finale [of the Fifth], which is taut and bracing; occasional stinging accents provide scintillating moments amid propulsive energy and momentum. On the whole, however,... — BBC Music Magazine, December 2012 More…

Throughout his life, Tchaikovsky was preoccupied with the idea of Fate, describing it as ‘that fatal power which prevents one from attaining the goal of happiness’. This dark force haunts both the Fourth and Fifth symphonies, which each juxtapose some of Tchaikovsky’s most beautiful and graceful melodies with music of intense power and dark despair. Principal Conductor Vladimir Jurowski continues his journey through the composer’s six symphonies, leading the London Philharmonic Orchestra in these live concert recordings.

Since his appointment as Principal Conductor of the London Philharmonic Orchestra in 2007, Vladimir Jurowski has led the Orchestra in some of the finest recordings on the LPO label, including 2011’s popular and critically acclaimed Mahler Symphony No. 2.

I especially enjoy the finale [of the Fifth], which is taut and bracing; occasional stinging accents provide scintillating moments amid propulsive energy and momentum. On the whole, however, this Symphony receives a plainer treatment than I expected...the LPO acquits itself well, and climaxes possess all the fizz and firepower one could want.

both these performances exemplify what makes Jurowski's approach to Tchaikovsky so special. The tension between the classical and the romantic is at the heart of things...The playing throughout...is marked by a oneness with Jurowski's vision and, it goes without saying, a now well-established empathy between the players of the London Philharmonic and their principal conductor.

These dramatic accounts...demonstrate the complete musical empathy between the Russian-born conductor and his players in these works...Both performances sound thoroughly run-in, yet without a hint of routine. Tchaikovsky’s genius — and his inner turbulence — are revealed with devastating impact.