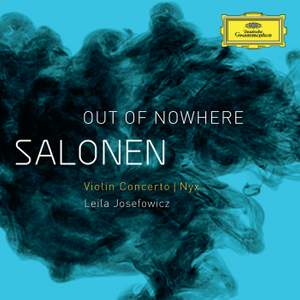 Esa-Pekka Salonen: Out of Nowhere

these performances, played with great polish and panache and recorded with a winning blend of clarity and spaciousness, provide the best possible advocacy. — Gramophone Magazine, January 2013 More…

Esa-Pekka Salonen’s four-movement Violin Concerto (2009) is perhaps the first great 21st century addition to the concerto genre. Written for the American violinist Leila Josefowicz, this highly attractive concerto “appears headed straight into the standard repertoire” (Classical Review), and has already been performed in major musical centres including London, Berlin, Boston, San Francisco, and Los Angeles. The concerto was written as Maestro Salonen neared the end of his 17-year tenure as Music Director of the Los Angeles Philharmonic.

The concerto is coupled with Nyx (2011), a single-movement pulsing piece for full orchestra that paints a musical portrait of the shadowy Greek goddess. The New York Times called the work “sweeping . . . and alluring”.

Esa-Pekka Salonen and Julia Fischer will perform the concerto next year with the Vienna Philharmonic while Leila Josefowicz will play the piece with the New York Philharmonic during the 2013/14 season. Nyx is being toured with the Symphonieorchester des Bayerischen Rundfunks and was heard this past season at Carnegie Hall.

these performances, played with great polish and panache and recorded with a winning blend of clarity and spaciousness, provide the best possible advocacy.

Though it's all impressively put together as a fine vehicle for the soloist Leila Josefowicz, there's no suggestion of Salonen rethinking the genre, or pushing its boundaries. The second movement is brief, throbbing and slow, the third a burlesque-like scherzo, while the long finale provides the only surprise, with its sudden plunge into Berg-like introspection, a slow climb towards a massive climax

Salonen has a conductor’s ear for translucent, shimmering sonorities, but there’s character and substance here too.

There are so many moments of jaw-dropping loveliness in the concerto– this would be a fantastic piece to hear live. But too often the work sounds like an amalgam of exquisitely polished effects, filched from Salonen’s favourite composers...Nyx is the sort of piece we’d all love to be able to write, a delirious soundtrack for an unmade film. Salonen’s performance is as flamboyant as you’d expect.