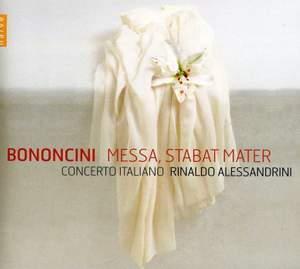 “Fifty years of ‘rediscovery’ of early music have led – in addition to that of ‘period style’ – also and above all to the rediscovery of the inexhaustible musical treasure trove conserved in libraries all over the world. And these two pieces by Antonio Bononcini might be seen as a perfect example of the phenomenon. In fact, the Stabat Mater (held in the Biblioteca Estense in Modena) is already known, having been published a few years ago and enjoyed a very occasional concert performance. By contrast, the monumental mass (now in the Library of the Florence Conservatory) has not yet been published and has never before been performed in public or recorded. We are dealing here with two outstanding specimens of an individual and vigorous contrapuntal style, combined with a typically Italian melodic line: a mixture that is quite certainly unprecedented, at least at the level of technical skill shown by Bononcini. The greatest cause for astonishment when one listens to this mass certainly comes from its dimensions and its conception: when one considers the relatively modest resources deployed, Bononcini’s work radiates a splendour of inspiration and a profundity comparable to that of the greatest contrapuntists, from Bach downwards. Nor should one forget the composer’s achievement in creating a synthesis between ecclesiastical and operatic styles: a delicate interaction that more or less determined the success and effectiveness of a sacred work at the time.” Rinaldo Alessandrini

Concerto Italiano’s revelatory interpretations have revolutionised our perception of 17th-and 18th-century Italian music (the group’s groundbreaking recordings of Monteverdi’s madrigals have achieved international benchmark status), establishing it with critics and audiences as the finest ensemble of its kind in Italy today. Concerto Italiano records exclusively for Naïve. Recent releases include Monteverdi’s L’Orfeo, a collection of sacred music by A. Scarlatti, Monteverdi’s complete Eighth Book and Bach’s Brandenburg Concertos. Rinaldo Alessandrini's latest recording '1600' [OP30531] is shortlisted for a Gramophone Award 2012.

This disc is a tour de force, a world premiere recording of stunning music splendidly performed...Alessandrini engages deeply with the composer's imagination, opening up his dense counterpoint...Mingardo stands out: the suspense she builds in her Stabat Mater solo, as she sings of mingling her tears with Christ's, is gripping...It's a performance that rewards many hearings.

Concerto Italiano's lean strings and two assertive theorbos make a telling impact throughout the Mass...These distinguished performances reveal exactly the kind of unfairly neglected repertoire that the Early Music Revival was invented for.