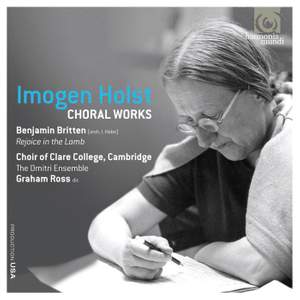 These performances are poised, immaculate, and just a little lacking in light and shade: the octane-level shoots up in the Keats settings, where the choir's female contingent evidently enjoys... — BBC Music Magazine, September 2012, 4 out of 5 stars More…

Holst, I: Mass in A minor

Holst, I: A Hymne to Christ

III. Psalm 91, He that dwelleth in the secret place of the Most High

I. Welcome Joy and Welcome Sorrow

III. Over the Hill and over the Dale

Holst, I: Hallo my fancy, whither wilt thou go?

II. For I will consider my Cat Jeoffry

III. For the Mouse is a creature of great personal valour

IV. For the flowers are great blessings

V. For I am under the same accusation with my Saviour

VI. For H is a spirit and therefore he is God

VII. For the instruments are by their rhimes

VIII. Hallelujah from the heart of God

Imogen Holst (1907-1984), the daughter of Gustav Holst, has long deserved recognition for her significant body of compositions, written throughout her life. After working as Benjamin Britten’s amanuensis (1952-1964), she returned to her own composing.

Graham Ross conducts the Choir of Clare College, Cambridge and the instrumentalists of The Dmitri Ensemble in these world première recordings of a selection of Holst’s choral works ranging from 1927 to 1972, three of which have not been heard since their first performance, together with the first recording of her imaginative and skillful orchestration of Benjamin Britten’s Festival Cantata 'Rejoice in the Lamb', made at Britten’s own request.

Since the founding of a mixed voice choir in 1971, the Choir of Clare College has gained an international reputation as one of the leading university choral groups in the world. In 2000 it became the first Oxbridge mixed voice choir to perform at the BBC Proms, singing Bach’s 'St John Passion'. The choir has collaborated with the Orchestra of the Age of Enlightenment in performances of Handel’s 'Jephtha' under the direction of René Jacobs, with the London Philharmonic Orchestra in Elgar’s 'The Dream of Gerontius' under Edward Gardner, and with the Israel Camerata in Bach’s Weihnachtsoratorium. Other collaborations have included the Academy of Ancient Music, Freiburg Baroque Orchestra, Manchester Camerata and the Schubert Ensemble.

In addition to live performances, the choir has produced an impressive catalogue of recordings. Recent releases include Sacred Choral Music, a recording of music by Vaughan Williams, which was hailed as ‘exceptional’ by BBC Music Magazine and acclaimed for its ‘sweeping energy and rich detail’ by Classic FM.

Since its founding in 2004, The Dmitri Ensemble has championed many new and lesser-familiar works both in concert performance and with an increasingly diverse discography. Based around the central core of a string ensemble, the Ensemble has made acclaimed recordings of works by James MacMillan (5-star reviews from Gramophone and BBC Music Magazine, both Editor’s Choice), Giles Swayne (double 5-star review from BBC Music Magazine) and Judith Bingham, and a recording of previously unrecorded works by Vaughan Williams in collaboration with the Choir of Clare College, Cambridge. This recording of works by Imogen Holst marks the Ensemble’s first recording on the harmonia mundi label.

These performances are poised, immaculate, and just a little lacking in light and shade: the octane-level shoots up in the Keats settings, where the choir's female contingent evidently enjoys itself.

superb ensemble singing...The four soloists and chorus nicely capture the whimsical quality of the piece under Graham Ross, who has trained the choir with its impeccable ensemble.

The music on this disc shows the high craftsmanship by which she set store, but also a voice of her own, honest, unpretentious, fresh, a touch eccentric and very English, as she herself was...They all receive admirable committed performances.

Imogen Holst’s fastidiously crafted and enjoyable choral music in excellent performances … I think this may be the first recording that Graham Ross has made with the Clare College choir since succeeding Tim Brown as Director of Music and it’s good that he’s combined the choir with his Dmitri Ensemble. Both the singing and playing on this disc are extremely fine and the performances are presented in excellent sound. The presentation is lavish, with a beautifully produced booklet containing several very good photographs of Imogen Holst.

These world premiere recordings, finely sung by Clare College Choir, remind us how neglected her own compositions, forced into second place by other duties, have been...The beautiful Welcome Joy and Welcome Sorrow, for female voices and harp, gives an insight into her own, softly nuanced, pioneering voice.