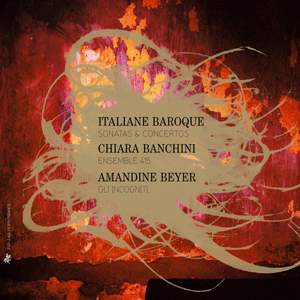 Geminiani, F: Concerto grosso No. 6 in A Major

Geminiani, F: Concerto grosso No. 9 in A Major

Vivaldi: Concerto for Violin in B Minor, RV 390

Albinoni: Sinfonie a cinque per due violini, alto, tenore, violoncello e basso, Op. 2, Sonata No. 3 in A Major

This set brings together the recordings of Italian music by Chiara Banchini and Amandine Beyer: Geminiani (12 concerti grossi), Vivaldi (concertos for 4 violins, Four Seasons), Valentini (concerti grossi), Leo / Porpora (Neapolitan concertos)… It is symbolic of a filiation between the two artists, Amandine Beyer having, moreover, succeeded Chiara Banchini as professor of Baroque violin at the Schola Cantorum in Basle, Switzerland. It will be even better perceived as it follows Bach's Sonatas for solo violin by Amandine Beyer and his Sonatas for violin and keyboard by Chiara Banchini, both having received a Diapason d’Or. It should be noted that this set includes the re-release of Vivaldi's Four Seasons by Amandine Beyer.