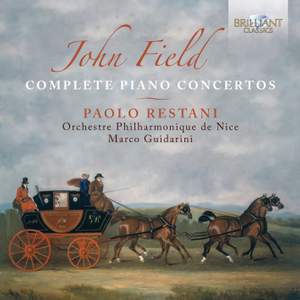 I. Allegro maestoso - Lento - Tempo I

John Field, inventor of the Nocturne. That is all most people know about this remarkable and influential Irish composer. Born in 1782 in Dublin, he became one of the most celebrated pianist-composers of the early-Romantic age. Admired by his contemporaries Hummel, Moscheles and Kalkbrenner, he also drew praise from Chopin (upon whose music he exerted a huge influence) and Schumann. ‘Discovered’ by Clementi in London in 1794, he was given a thorough musical education by the great Italian master, who quickly recognised the 11-year-old’s talent. Moving in circles that included J.B. Cramer, Dussek and Gyrowetz, he performed before Joseph Haydn in London. In 1799 he premiered his Piano Concerto No.1 in E flat to huge acclaim, and followed it quickly with the three piano sonatas Op.1. Clementi and Field left London in 1802 for an extended European tour, to include Vienna and St Petersburg.

The kindly Clementi arranged for Field to study with Albrechstberger, who had taught the young Beethoven. In 1803, in St Petersburg, the two men went their separate ways, Field having become the darling of the Russian aristocracy. ‘Not to have heard Field was regarded as a sin against art and good taste’said one commentator about the ‘Field fever’ that was sweeping the salons. His seven concertos contain some of his most strikingly original and beautiful ideas. Notable is the central slow nocturne section in the first movement of No.7 (praised by Schumann), and the storm sequence in No.5, complete with gong, bell, tam tam, trombone and a second piano. The Second Concerto remained in the repertoire of the great virtuosi Pachmann, Mark Hambourg, Nikolai Rubinstein and von Bulow. Chopin and Clara Schumann taught it. It remains one of the most influential and effective early-Romantic piano concertos, and the blueprint for Chopin’s two concertos.

A bargain for all fans of John Field's influential Piano Concertos